WASABI WALLET: Download anonymous Wasabi Wallet – an anonymous wallet for storing Bitcoin cryptocurrency. Presented as an application for Windows, Linux and MacOS operating systems. It has a fully open source code. The wallet is suitable both for transactions of individuals and businesses, if its owner can ensure the privacy of its customers. The main feature of the service is a built-in technology CoinJoin to anonymize transactions, built-in Tor and coin control. We will talk more about it and other Wasabi Wallet features in this article.Bitcoin BTC Wallet

Wasabi is a software that runs on a computer and is designed to manage bitcoins. The wallet is quite easy to use, despite the fact that under the hood it has a serious set of features. The wallet allows you to both import existing keys and create new ones. A few important features:

Wasabi comes with Bitcoin nodes (full node). This means that each user has the software required to run a full Bitcoin node on their computer, ensuring guaranteed consensus with the bitcoin blockchain. The feature is not enabled by default, but can be activated in the settings, just like the TOR feature.

How to start using the Wasabi Wallet

Step 1) Go to and download the Windows, Linux or MacOS version.

Step 2) Then simply install the software in the usual way, just like any other.

Step 3) Launch Wasabi Wallet. Then you can create your new wallet, remember to save your password and sido phrase in a safe place, or connect your existing wallet and start using it.

To receive Bitcoins from Wasabi Wallet, go to the Receive tab and generate an address. It’s important to mark all addresses so that you can understand who the receipt came from in the future.

On the Send tab, you can send cryptocurrency. Select the coins you want to send, insert the receiving address. You can designate observers – those who are aware of this transaction. Specify the amount and adjust the commission. Enter a password to confirm.

How to clear bitcoins in CoinJoin Wasabi

If you don’t want anyone to be able to track your transactions or know the number of bitcoins you own, use the CoinJoin tab. This protocol acts like a bitcoin mixer, confusing coins and increasing anonymity. Despite the complexity of the protocol’s inner workings, it is easy to use:

It’s enough that after a while the anonymity has increased significantly.

The minimum amount for a transaction is currently approximately 0.1 BTC, the fee for the mixer is 0.003%.

The general conclusion about Wasabi Wallet

Wasabi Wallet is not just an anonymous wallet, of which there are quite a few nowadays. For its creation the code was practically written from scratch, a lot of new features were added (blockchain synchronization, Tor support by default). Data leakage is virtually impossible here, so the wallet is considered the best option for anyone who cares about anonymity. Wasabi Wallet is one of the best in terms of anonymity and reliability. This is due to the fact that it has the following security measures:

The wallet’s high anonymity is of concern to authorities. Europol officials believe it helps cybercriminals exploit bitcoin transactions. According to the investigation, one-third of all cryptocurrency passing through Wasabi comes from the darknet. And as we know, that’s where almost all transactions involving the purchase of illegal goods or services take place.

MONERO WALLET: How to create an anonymous and secure XMR-wallet

Tue May 17 , 2022
QuickMiner NiceHash and NBMiner, which already have full LHR unlocking for Nvidia low-hash rate (LHR) GPUs, now have a third option available. T-Rex Miner comes with 100% LHR unlocking for Ethash and AutoLykos2 crypto algorithms on Nvidia graphics cards with LHR v1 and v2, only the latest GPUs with LHR v3 - RTX 3080 12GB and RTX 3050 are not supported yet. Note that the full LHR unlocker on T-Rex requires 512.xx driver version on Windows and 510.xx on Linux to work properly. Also make sure that T-Rex Miner is running with administrator privileges to make the unlock work. Download the latest version of T-Rex 0.26 .1 With 100% LHR unlock for Ethash and AutoLykos2... 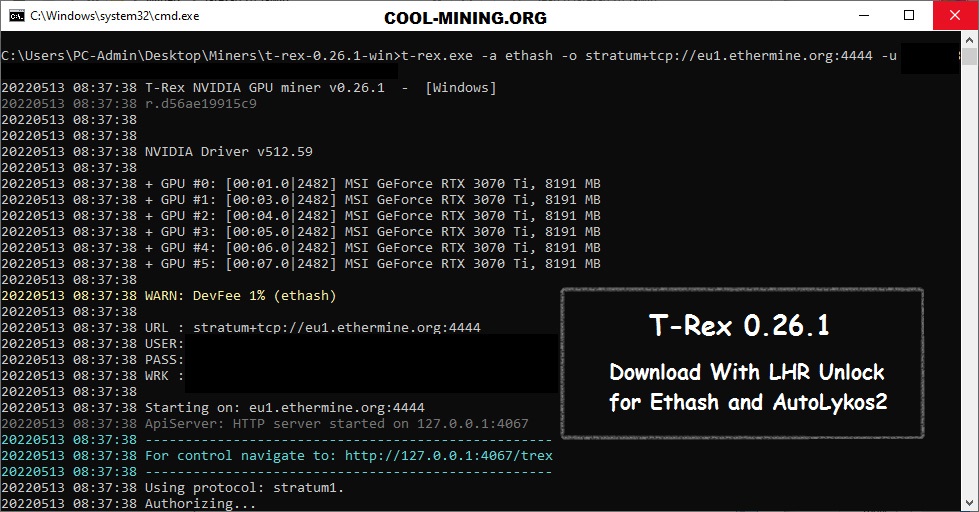