Awesome miner (Nvidia & AMD CPU GPU miner) – One of the most multifunctional miners supporting graphics cards from both AMD and Nvidia. In addition, there is the possibility of mining on the CPU. Awesome Miner is a web-based interface used for managing and monitoring large-scale mining operations. The brand hit the market in 2014 and gradually became software used by numerous miners. Awesome Miner is suitable for mining farms containing up to 200,000 ASIC miners and 25,000 GPU/CPU miners. More than that, Awesome Miner is capable of detecting the occurring malfunctions in real-time and fixing them automatically. This feature is crucial for mining farm owners as finding the troubled devices without automation is not an easy task at times if the farm has thousands of devices running. The software is compatible with the most popular mining pools and can be set really quickly. The software is good for Windows and Linux. The Mac version and versions for other operating systems are not available. The app requires installation but users can also access the web version from any device. Monitoring is possible thanks to the Cloud Service. The users can get the info through the Telegram notifications or email. Those who use Cloud Service can receive alerts via SMS.

Awesome Miner supports GPU, CPU, and ASIC mining. To provide full control on the overclocking of the GPU devices, Awesome Miner grants its users with such a feature as Native Overclocking. This feature doesn’t require the use of any third-party software and is good both for AMD and nVidia. What is especially good is that the overclocking parameters can be applied for all the devices on the farm simultaneously. It really makes the setting of the farm much easier. Miners can be divided into miner groups for more comfortable monitoring of the mining process. More than that, it is possible to see the heat maps.

Easy to get started

The dashboard of Awesome Miner displays the current power consumption both for AMD and nVidia GPUs. The power associated with each certain mining software is displayed separately so users are able to consider which mining software is more profitable for them. Apart from power consumption, there is a real-time mining profit, hashrate, and the chosen mining pool displaying on the dashboard. All this info helps to make observations and decide if everything goes well or should something be changed. Among the other properties displayed on the dashboard are temperature, fan speed, overclocking level, and so on. This information can be checked in the GPU tab of the miner interface. Users can manage data associated with the mining process. For instance, they can analyze the full mining history, export CSV data in a form of an Excel file, and view the charts.

Another notable feature is called “Profit switching”. The software analyzes the statistics taken in real-time from multi-coin and single coin mining pools. After the benchmark that checks the properties of the mining rig/farm, users can choose the mining pool based on estimated profit and quickly switch to a different pool for better profit anytime.

Awesome Miner is compatible with dozens of mining apps. The list includes Bminer, CcMiner line, several miners by Claymore, CpuMiner-Opt, Ethminer, a number of Cuda miners, NanoMiner, NBMiner, NoncerPro (both nVidia and AMD versions), PhoenixMiner, the SgMiner line, TT-Miner, XMR-Stak-RX, XMRig miners, and many others.  This mining software is capable of mining over 100 cryptocurrencies. Many of the coins available for mining with Awesome Miner can be exchanged . Those who hate any limits are free to add custom solutions and widen the list of supported algorithms, mining pools, currencies, and mining software themselves. It means that theoretically, people who find Awesome Miner convenient enough can use it for any kind of mining through customization.

The app is compatible with the following mining pools: 2Miners, BlockMasters, CoinFly, Ethashpool, Mining Pool Hub, Nanopool, NiceHash, Slush Pool, and many others.

Awesome Miner supports most of the ASIC miners. It can be used by the owners of the following brands: Aisen, Baikal, Bitmain Antminer (over 40 models), Blackminer, Dayun, Canaan Avalon, FusionSilicon, Futurebit, GekkoScience, Halong DragonMint, Hyperbit, IBeLink, Innosilicon (over 10 models), MicroBT Whatsminer (10 models), Obelisk, OwMiner, PinIdea, and Spondoolies. The platform is open to accept requests to add the other ASIC miners to the list. The website notes that some of the miners not included in the list will probably work well with Awesome Miner.

The ASIC miners owners can use the External Profit Switching feature to avoid revenue holdbacks. The Awesome Miner users can switch the priorities of the mining pools they mine on. By default, the priority is set based on the profitability of the pool. Bitmain Antiminer users looking for an increase of hashrate can opt to benefit from the Awesome Miner Antminer Firmware feature, a custom firmware provided by Awesome Miner. The feature improves the hashrate and helps to save energy making mining more efficient. For a number of Antminer models, the feature is free. The increase in hashrate varies from 10 to 40 percent depending on the model. The devices can be overclocked and underclocked. Interestingly, the feature is very user-friendly, as users only have to specify the desired hashrate. The rest is done by the Awesome Miner software. The manual setting is also available.

The parallel mining concept utilized by Awesome Miner helps to avoid interruptions while mining. Awesome Miner allows checking the current power usage of the active ASIC miners and chip performance information. The physical miner can be detected via initiating a LED flash. Awesome Miner has an inbuilt antivirus that can scan the mining devices. Antminer devices can be put to a sleep mode to save power. The configuration of the settings can be saved and restored when needed. All the preferences can be applied to any number of miners.

Awesome Miner is opened to automatization. The users can set the triggers (certain conditions that automatically call the set action). The triggered actions can be the reset of the miner, fixing the issues, or providing notifications. For that purpose, the user needs to set the rules in the Rules tab. Some of the rules are already provided by Awesome Miner while others can be created by the platform users. The examples of possible rules are “mine only when the PC is not used” or “reboot the Antminer if the chip fails”. The commands for triggers and actions can be written via the inbuilt #C script engine. The external applications can monitor the info from Awesome Miner accounts using HTTP API.

How to Get Started?

The sign up requires choosing the subscription plan. The price varies from zero to 4$ per month. The user should specify the number of miners she/he is going to use and provide an email address. The subscription plan can be changed via the Upgrade button on the Sign Up page.

Then the user must pay for the chosen subscription and receive the code sent to email. Usually, it is sent in minutes after the payment is complete. The registration code shared with other users is blocked without a refund. One user can associate the code with up to 4 devices. If one needs to have the same code for more devices, she/he should reach out to the support team.

The user should decide on whether she/he wants to set an external miner, a managed miner, a network scan, or a managed profit miner. Those who want to mine using CPU should opt to set a managed miner. Then, the user must provide a reward address and other information associated with the worker. The next important step is the benchmark. To do that, one needs to proceed to the Tool tab and find the Benchmark option. The mining devices are scanned in order to find the most profitable mining configuration.

The use of Awesome Miner requires buying the mining license. It is possible to use up to 2 miners without buying a subscription. The paid options are the monthly subscription ($4 per month) and the yearly one ($36 per year). These prices are relevant for those who have 2 miners. There are discounts applied to those who use more miners. Those who have at least 25 miners can enjoy a 10% discount. The owners of over 100 miners have a 30% discount. 400 miners provide an opportunity to pay half of the price. 1000 miners owners pay only 35% of the price. The maximum discount is 75%. It is applied to users that have over 5,000 miners. 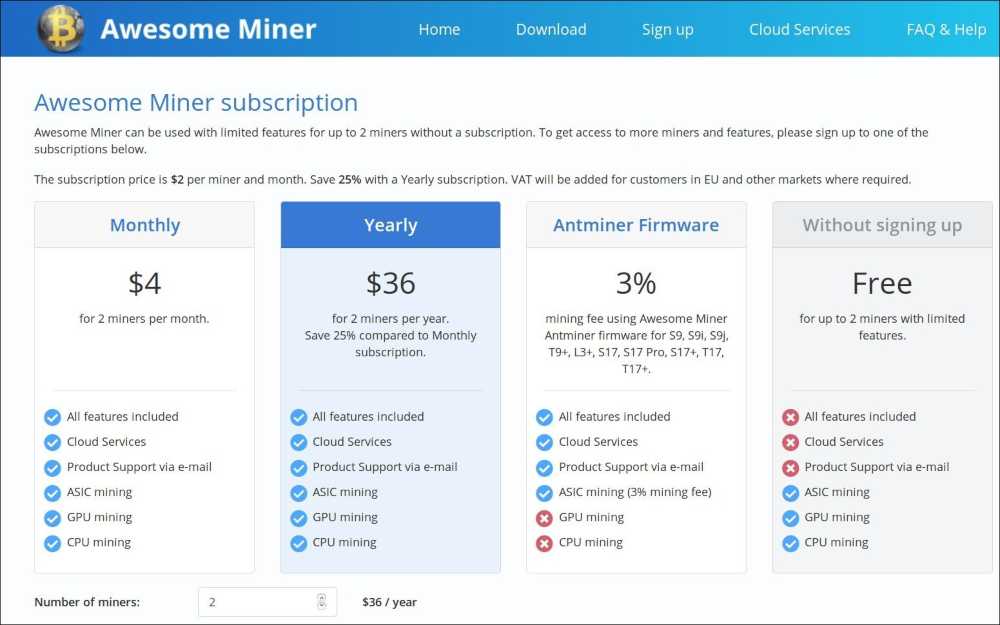 For the Antminer firmware users, the mining fees vary from 2% to 3%.

The 3% fee allows mining without paying for the license. Those who use Antminer firmware with a 2% fee have to pay for an Awesome Miner license.

The software is working on the users’ networks. It doesn’t contact third parties which makes the service more secure. The protection measures available for users are set to let the mining farm owners control access to the operations. The strangers cannot access the rigs. Management of huge crypto mining enterprises usually requires collective access to the mining dashboard. On Awesome Miner the mining rig/farm owner can limit access via authentication checks and password requests.