What is NiceHash QuickMiner?

NiceHash QuickMiner is a next-generation miner developed by NiceHash. Currently, it is in the experimental phase! Please use (still work in progress but contains most of information you are after). Why you should use NiceHash QuickMiner over NiceHash Miner? Read .

URGENT NOTICE! If you have issues with NiceHash QuickMiner not working (properly), then .

Latest version with ability to set memory timings – say goodbye to EthEnlargementPill – . Documentation regarding memory timings will be available here (it is currently being built):

Data for optimisation profiles is here:

If you have any suggestions for improvements (better clocks for better efficiency), open and let us know.

– NiceHash QuickMiner uses only Excavator for GPU mining and XMRig for CPU mining. Excavator is an in-house developed miner and is 100% free of any malware, and XMRig is an open-source CPU miner. There are some more open-source C# libraries used. Code running as NiceHash QuickMiner is either developed by NiceHash or used from public repositories, which means it is 100% safe, and you do not have to worry about exposing your PC’s sensitive data or getting infected with malware. NiceHash QuickMiner will (in the future) NEVER use any closed source software, software of unknown or unverified origin. The list of modules & libraries is at the end of this .

– No benchmarks. You start mining IMMEDIATELY.

– No third party tools for GPU overclocking needed. NiceHash QuickMiner has its own powerful and quick tool for setting overclocks and fan speeds.

– Determine best overclock easily and quickly as never before with OCTune.

– Watchdog takes care of restarting the mining process if something fails.

You can download the latest version of NiceHash QuickMiner .

For NiceHash Miner to fully work, it relies on 3rd party plugins and miners. In most cases, these are programs of unverified and unknown origin. Their real names do not know the authors of these programs, or no company stands behind the software. Why developers of these programs keep their identity so private is unknown to us. There could be various reasons. The reasons are most likely not to harm miners because they charge developer fees for using their miners. But we cannot be entirely sure that they have no intention of ever putting anything harmful inside their programs. Trusting them blindly would be a big mistake.

That is why, if you want to use NiceHash Miner, you need to agree with that, confirm and acknowledge that, and if these unknown developers really do something stupid one day, NiceHash cannot be held liable. That means, if you use your PC for serious business, have important information on it, or even coins or money, it is best NOT to use 3rd party miners of unknown origin. Luckily, NiceHash has created its own miner in the past called Excavator. The code running is entirely developed in-house, and NiceHash can vouch that there is nothing harmful inside. Another lucky factor is that the speeds Excavator reaches in Daggerhashimoto (Ethereum mining) are completely comparable to other miners with developer fees. When you also calculate in developer fee, Excavator can be, in most cases, even more profitable than 3rd party miners.

Using Excavator on its own is not so simple – you need to configure command files and prepare everything for your machine to work properly. That is why we created another product for end-user called NiceHash QuickMiner, which does all the hard & tricky configurations automatically. Hence, you click buttons and don’t have to worry about too deep technical stuff. Because NiceHash makes all the Excavator plus wrapper (QuickMiner) code, there is no risk involved with anything harmful being put in. NiceHash is a public service run by a publicly known company from EU – Slovenia – H-BIT d.o.o.

NiceHash QuickMiner brings an awesome feature that will save you a lot of time and hassle when optimizing your graphics cards for mining!

When your rig (that is running NiceHash QuickMiner) appears in , you can quickly optimize its mining performance by clicking the OPTIMIZE button and then select one of the three options:

The following table explains for each GPU component what is happening. Do note that this table is very generalized and that each GPU might behave slightly differently.

Optimization feature is only available for RTX 2000 series, RTX 3000 series, GTX 1660, GTX 1660 Ti, GTX 1660 Super, and TITAN V graphics cards. Do note that we are constantly trying to improve these optimizations, which require a lot of testing and performance measurements. Our numbers will surely improve soon to offer you even better performance and efficiency. To get the latest optimization applied for your GPU, you only have to restart NiceHash QuickMiner. You can also view the that is being used. Medium optimization may not work for all cards. We are working on Lite optimization to be able to work for 99.9% of all video cards.

WARNING: The optimization process applies an overclock to your card, which means that your card is running with clocks that were not set by NVIDIA. This means that your card may not be stable. It is strongly suggested to try Lite optimization first and test it for a day. If everything works okay, then try Medium. Also, do not enable Autostart with Windows before you finish performing optimizations. It can happen that you get caught in an endless restart loop because NiceHash QuickMiner applies overclocks at the start and can cause your system’s immediate crash if clocks are too high for your system. In that case, unplugging the internet connection for boot time may help because Excavator cannot mine until it gets data from the servers.

NiceHash QuickMiner only works on Windows 10 x64 (any edition) with NVIDIA graphic cards that are at least GeForce series 1000 with a minimum of 6 GB of VRAM. A detailed

How can I get started?

⦿ Running NiceHash QuickMiner for the first time is explained .

⦿ Tips and tricks on how to optimize and maximize your earnings are .

⦿ Information on how to use OCTune is located .

⦿ Do you have a problem with NiceHash QuickMiner? You will find an explanation and possible resolution .

If you want to read more on why NiceHash has created NiceHash QuickMiner and how is it different from the existing NiceHash Miner, .

Join our community on or and discuss with our developers!

Thank you for your support!

Fri Apr 2 , 2021
This post is also available in: Русский NBMiner – is a closed source GPU miner ETH, CFX, RVN, GRIN, BEAM, AE for Nvidia CUDA and now AMD, which is available for both Windows and Linux operating systems. Has built-in support for backup pool configuration as well as support for SSL […] 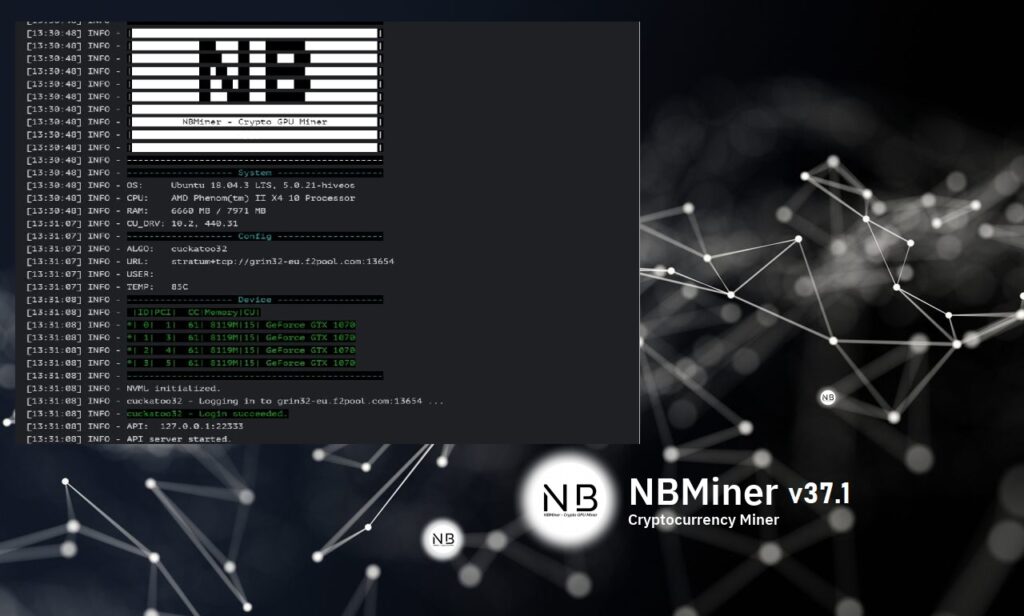