This miner supports a range of algorithms. Please see the list below for details. The miner is configured via command line only, please run with the –help option to print a short help message for how to use the command line options.

The miner includes a read-only api based on the sgminer-5.5 API. Both the json and text formats are supported. For more details, we refer to the sgminer api documentation.

This miner includes the following algorithms and respective dev fees:

The miner reports GPU hash rates every 30 seconds. These are the full GPU hash rates before dev fee deduction (your pool hashrate will be slightly lower).

For reporting bugs and/or for features requests, please open an issue on this project’s github .

Thu May 21 , 2020
This post is also available in: Русский NANOMINER 1.9.4 (Nvidia & AMD miner) is software developed by Nanopool to create cryptocurrency structural modules based on the following algorithms: Ethash, Ubqhash, CryptoNight (v6, v7, v8, CryptoNightR, Reverse Waltz), Cuckaroo29, Cuckarood29 and RandomHash KAWPOW. The current version of nanominer was created to […] 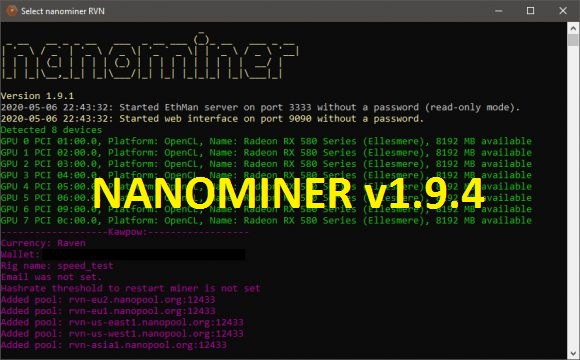