Kawpowminer v1.2.2, the new official miner supporting the new KAWPOW algorithm, which is now used by Ravencoin for mining after the fork. This release is based on the Progminer ProgPoW miner and is open source and does not require development fees, unlike some other miners that also support the KAWPOW algorithm.

Please note that the binary release of the miner still does not include the necessary Nvidia CUDA libraries, so you also need to install the latest version of the Nvidia CUDA toolkit (or at least the runtime libraries from it).

The latest version of the Kawpowminer 1.2.2 miner is available for download at the links below:

kawpowminer is an ProgPoW GPU mining worker: with kawpowminer you can mine Ravencoin, which relies on an ProgPoW-based Proof of Work thus including Ethereum ProgPoW and others. This is the actively maintained version of kawpowminer. It originates from the project. Check the original implementation and for specification.

The kawpowminer is a command line program. This means you launch it either from a Windows command prompt or Linux console, or create shortcuts to predefined command lines using a Linux Bash script or Windows batch/cmd file. For a full list of available command, please run:

Sat May 16 , 2020
This post is also available in: Русский A couple of days ago, an updated version of Z-enemy 2.5 miner was released as an updated version, which added support for the KAWPOW algorithm, which now uses Ravencoin (RVN). The Z-ENEMY miner was not the first to support KAWPOW, and was not […] 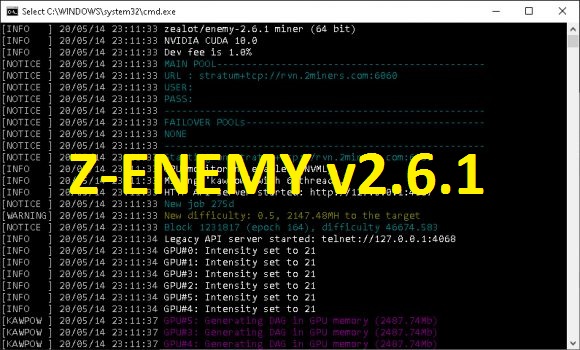